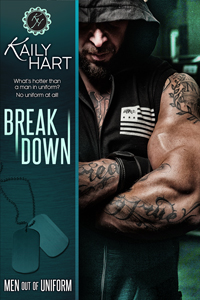 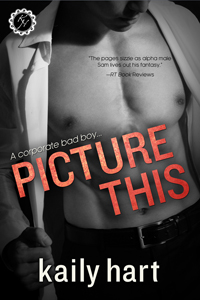 Note, this book was originally published by Ellora’s Cave in June, 2010

Desperate and young, Jillian Moore did something she knew would one day come back to bite her in the ass. She’d posed nude. For money. Years later, and on the fast track to a successful career, she’s still haunted by her mistake. She can’t help but wonder when her past will catch up with her.

Samuel Steele is not short on female attention, but the women who warm his bed pale in comparison to the fantasy he’s created of the seductive temptress in the painting hanging prominently in his bedroom. A fantasy that has ruined his once-satisfying sex life. When he discovers that her exact likeness works in his building—works for him, in fact—things get interesting. Perhaps there’s hope for his sex life after all…

4.5/5 cherries and Book of the Week from Whipped Cream Reviews

“Picture This is the debut short story by Kaily Hart, but it doesn’t read like a debut story. Ms. Hart has a way with words that drew me in immediately and a style that kept me in my seat through the story. Once I started it, I couldn’t put it down…If you want a story that packs an emotional punch, steams the computer screen, and is one you won’t soon forget, then you need to read Picture This.”

“The sexual tension and animal hunger took precedence, but after that real emotion and need took it’s place. A very satisfying story on a lot of different levels.”

“This fast-paced Quickie® is a super-sexy romp from the boardroom into the bedroom. The pages sizzle as alpha male Sam lives out his fantasy.”