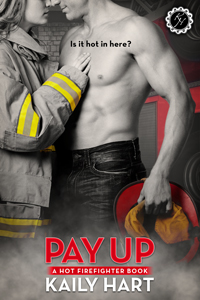 Note, this book was originally published by Ellora’s Cave in October, 2010

At least that’s what Carly Wagner wanted Rio Reyes to be. She’d settled for two out of three for almost a year and it just wasn’t enough. Not anymore. When Rio proposes a bet—of the sexual variety—she knows it’s out of character and he’s not really serious, yet she can’t resist. The payoff could mean finally getting her hands on the gorgeous firefighter she’s drooled over since she moved in next door.

The timing had never seemed right for him and Carly, but that hadn’t stopped Rio from imagining wild and wicked things about her. It had been a joke—sort of—but Rio’s shocked when she takes him up on the dumbass bet. Now he’s in a world of hurt, because regardless of who wins, he might be crossing a line he never thought he would, and jeopardizing a friendship that means more to him than anything.

4.5/5 cherries and Book of the Week from Whipped Cream Reviews

“Ms. Hart’s writing is superb, perfectly planned and executed with a beautiful style.”

“With a few laughs and plenty of steam, this was a read you don’t want to miss.”

“Ms. Hart doesn’t just write compelling characters, she pulls you into their world. Kaily Hart is a You Gotta Read author.”