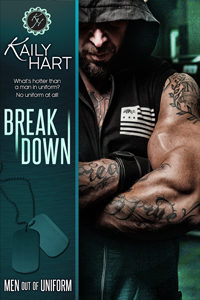 Roarke Daniels came back from war scarred and broken. He’s used to getting exactly what he wants and that includes keeping people away. Far away. He’s big, mean and dangerous and they’re his good qualities. On a good day.

Marina Cole is rebuilding her life after the whole white picket fence thing went sideways. She’s got a crumbling house, a dead-beat ex-husband and doesn’t intend to be a notch on any man’s bedpost.

Roarke had resigned himself to being alone. Too bad no one gave Marina the memo. Marina had accepted that she wasn’t meant for happily-ever-after. Too bad Roarke was a stubborn SOB. Good thing they were both wrong.